The cardiovascular system is particularly sensitive to androgens, but some controversies exist regarding the effect of testosterone on the heart. While among anabolic abusers, cases of sudden cardiac death have been described, recently it was reported that low serum level of testosterone was correlated with increased risk of cardiovascular diseases (CVD) and mortality rate. This review aims to evaluate the effect of testosterone on myocardial tissue function, coronary artery disease (CAD), and death. Low testosterone level is associated with increased incidence of CAD and mortality. Testosterone administration in hypogonadal elderly men and women has a positive effect on cardiovascular function and improved clinical outcomes and survival time.

Although at supraphysiologic doses, androgen may have a toxic effect, and at physiological levels, testosterone is safe and exerts a beneficial effect on myocardial function including mechanisms at cellular and mitochondrial level. The interaction with free testosterone and estradiol should be considered. Further studies are necessary to better understand the interaction mechanisms for an optimal androgen therapy in CVD.

The effects of testosterone on myocardial function have generated a great deal of discussion in the literature but remain controversial. Previous studies have found that in men of all range of age the administration of testosterone resulted in an increased cardiovascular risk. The abuse of androgens in bodybuilders has been associated with myocardial infarction (MI). Higher doses of androgens have been considered toxic on the cardiovascular system, but no association between incidence of acute cardiac events among frequent users of androgens has been found. Recently, an increasing number of clinical trials showed lower testosterone levels were observed in men with a greater incidence of CVD and mortality had lower testosterone levels.

The decline of testosterone level in men is a physiological process due to increasing age, but many pathophysiologic processes such as malnutrition, sedentary lifestyle, and chronic diseases (type 2 diabetes, obesity, etc.) play an essential role. Asymptomatic hypogonadism is observed in men 30–79 years old with an incidence of about 5.6% and is more relevant in aging subjects. In recent years, prescriptions for testosterone replacement therapy have increased tremendously, 500% from 1993 until today. This degree of increase suggests that many are not necessary, probably due to self-prescription sustained by advertising. This review provides an update on the implications of testosterone for cardiovascular function and attempts to explain its role at the molecular and cellular level. 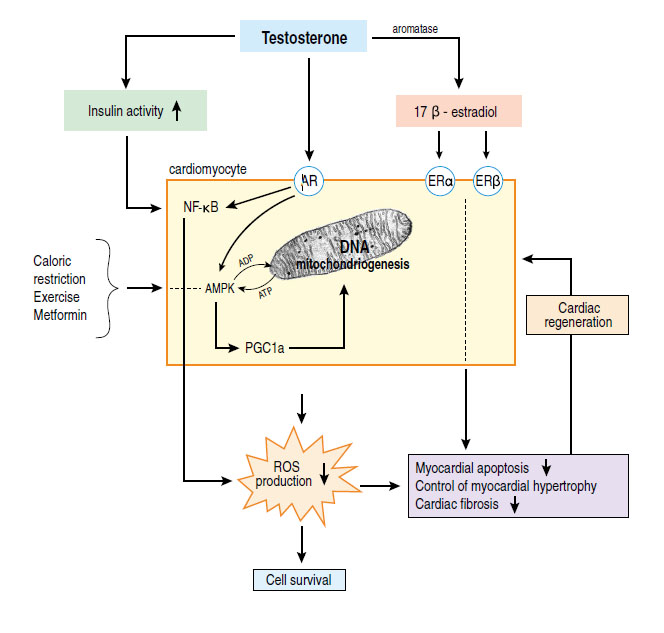